This is where it becomes odd. One would think, panoramic cameras were a landscape photographer's dream. They definitely are – in theory. In real life, I don't see an awful lot of them around. In fact, I don't see them at all. They seem like curios, expensive toys, whimsical creations, you got the idea. Still, if you are willing to own one, there are quite a few options.

Our fascination with panoramic images is easy to understand – in the end, this is the way we see the world. When it comes to landscape photography, the conventional image format is simply too narrow compared to what we recall from the reality.

This tightness of the ubiquitous imagery and the unconscious desire to overcome its limits were probably the main reasons behind the immediate success of CinemaScope after it first hit the screens.

CinemaScope logo from The High and the Mighty trailer, 1954
2.35:1 panoramic format

While not "officially" specified, a panoramic image would have an aspect ratio greater than 2:1, meaning its longer size should be at least twice the shorter one. Stitching together two images from a standard camera will suffice – even when working with the more square-like 4:3 format and taking into account some overlapping along the edge.

This is actually the most common method of panorama creation to date. Whether accomplished in one continuous sweep with the camera and left for completion to its software, or manually composed from several exposures taken by a tripod-mounted rotating camera – this is the way to go for the widest possible prospect.

Specialised panoramic cameras, even those with a full 360° field of view, are much humbler in respect to resulting image dimensions. Still, looking at your massive image print is a hugely satisfactory experience, for the photographer and the owner alike.

Depending on the attached lens, Seitz' Roundshot D3 360° camera can get you an image 164,929x7,500 pixels large. This is rather big indeed. We discuss its sister 6x17 model further down.

From the functional point of view, panoramic cameras can be divided in following groups: 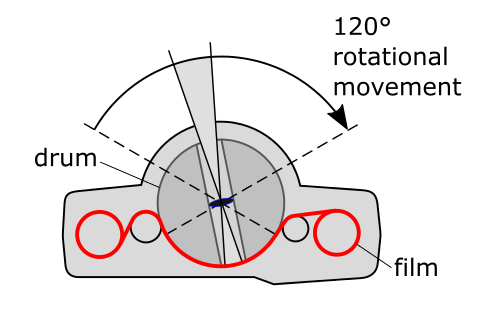 The market for panoramic cameras is surprisingly quite alive, given that they are rather expensive and not that prominent on location. While models still in production are rare, used discontinued pieces are readily available. Scouting them is not much of a problem – there are plenty of choices at all the usual suspects online.

Below is the discussion of some popular panoramic cameras, both modern and of yore.

These are probably the most renowned from the gang. Launched in 1998, the original model was able to record medium format-sized, 65mm wide frames onto the standard 35mm roll film. A cartridge with 36 standard frames would accommodate 20 panoramic exposures. It was possible to freely switch the image format mid-roll.

In modern terms, it was an interchangeable-lens mirrorless camera. At the time, you would call it a classic rangefinder. The system offered three not very fast lenses, a 45mm f4, a 90mm f4, and as an afterthought, a 30mm f5.6. With the camera set to panoramic, their respective field of view changed to that of 25mm, 51mm, and 17mm lenses.

The first model was more mechanical than electronic, very cumbersome to use, and hugely expensive. Nevertheless, it was released to raving reviews. The successor thankfully introduced the display of shutter speed and horizon indicator in the viewfinder, and further raised the price bar. The production ceased in 2006.

10 years later, they still pop up occasionally on the used market along with inevitable fakes and with seemingly unchanged price tags.

Serial numbers of all Hasselblad camera bodies and lenses, including those of XPan, follow the same pattern, with the 3rd and the 4th characters indicating the production year. This is encoded with letters from the sequence VHPICTURES – VH stands for Victor Hasselblad – corresponding to digits 1234567890. Any other character in these positions, or something outside the XPan production range from 98 to 06 should tell you to abstain from the deal.

NOBLEX is the brand name of panoramic film cameras produced by Kamera Werk Dresden, Germany. In these, the film wrapped around a curved plane is gradually exposed by a swing-lens with a vertical slit shutter.

The lens drum turns full circle for a single take. In order to evenly expose the film, the lens first spends extra time to accelerate to a constant speed. Therefore, actual time required for each shot is much longer than the selected shutter speed. The fastest possible exposure with the NOBLEX 135, 1/500 s, actually takes 1/4 s. That's a lot even for camera's 29mm fixed-focus lens – hand-held is not much of an option.

The models from the above-mentioned family accept 35mm film and render 19 images sized at 24x66mm on a 36-frame roll. This is only seemingly comparable to XPan's output. NOBLEX cameras have a much wider field of view matching that of a 9mm full-frame lens.

Unfortunately, a handy chart of frame sizes from different panoramic cameras on the manufacturer's website seems no longer available. The side-by-side comparison of NOBLEX own systems is still to be found in the internet archive.

NOBLEX PRO cameras from 150 and 175 series are medium-format models producing six and four exposures, respectively, on a 120 film roll.

Unfortunately, I wasn't able to locate any online camera offers save one in New Zealand. Camera Wiki features a page dedicated to Noblex cameras, with nice pictures of the subject.

If you are curious, Russian-made Horizon series of cameras have a similar functionality if not nearly the same quality, nor the price for that matter. They are easy to track down online. 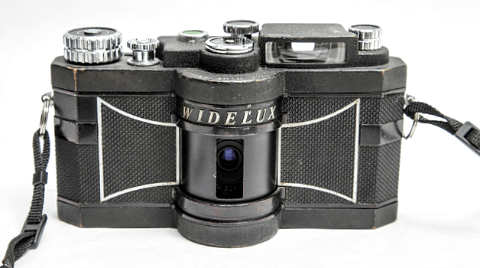 The German specialist manufacturer has two panoramic models in its medium-format range, 612pc II and 617s III. The former produces images with a 2:1 aspect ratio and is compatible with five lenses, the widest being a 56mm f5.6. Its angle of view is comparable with that of a full-frame 18mm lens. The body equipped with the lens and the viewfinder weighs in at 2kg (4.4lbs).

The bigger camera features an aspect ratio of 3:1 and accepts four lenses from 72mm to 250mm, all f5.6. The widest lens is equivalent to a 15mm full-frame, while other options match 19mm, 38mm and 51mm. It's quite a heavy beast tipping the scale at 2.7kg (6lbs) and up when fully equipped.

The cameras are real old school, strictly mechanical and very sturdy. You are heartily invited to stroll through Linhof's sample gallery. (Click around to find works from panoramic cameras.)

The prices are prohibitive, to say the least, but if you can afford one – and a lens to equip it with – you will be able to find some below:

Along the same lines and within the similar price range, Kenko Professional Imaging Co. produce some fine medium-format cameras with their Horseman "super-wide" lineup. The models comprise "standard" 6x17 and 6x12 panoramic options with one essential addition: Horseman SW612D is compatible with digital backs from both Hasselblad and Mamiya. Fitting digital lens units from German specialists Rodenstock and Schneider start at 23mm. This focal length would translate to 15mm full-frame when put atop the right sensor. The cameras will also work with roll-film backs for 6x7 and 6x12 formats.

The SW617 camera is very similar in its specifications to the Technorama of the same format but features a body with only half the counterpart's weight. This may work out as a truly unique selling point. The SW612 film-only camera sports a body 340g (3/4lb) light.

Two sample picture galleries for the SW617 at the producer's website are well worth having a look at.

If you like science fiction, you got to love this one. The camera doesn't need any medium at all, no film, no sensor, nothing—only light. Its scan back is capable of rendering a scene with 160MP resolution in just one second. The image, all 300MB of it, is immediately transferred to a connected computer. A lens is still required, though.

This is so mind-boggling – telepathy and teleportation both spring to mind – that the price actually doesn't matter. I think, the camera was released in early 2007 at 46,900 SFr (it's Swiss francs). If you are seriously interested, they probably will disclose the current number.

Be sure to check the sample image gallery at manufacturer's. I can't say if this is the camera itself, or all exhibited artists use the same workflow in post, but all images look to me exactly like the camera sounds – unreal. Maybe it's just me, though.

However, given the opportunity, I would try it. 160MP, I'll be damned.

If you wondered, the camera advertisement from the beginning reads as follows:

The "Al-Vista" Camera Takes a Broad View of Things

As the view from a mountain top exceeds the view seen through an open door, so does this new camera surpass the one of ordinary construction. It is a great improvement. We cannot in this small space describe its unique features. But it is wonderfully simple in construction and therefore durable. The orders are outrunning the capacity of our factory, but, of course, that will be at once enlarged.
Let us send you our free catalogue. It tells all about this wonderful machine.
The camera figured here is the Al-Vista 3B. It is adapted for both time and instantaneous exposure, and takes pictures 3½x4½ and also 3½x9. Rapid Rectilinear lens. Heavy nickel fittings. Black morocco leather. The price is $20.

Alas, they don't call it a panoramic camera. "Al-Vista", though, is pretty cool.