Reykjavík 101: Your guide to the capital of Iceland

Reykjavík, the small capital of Iceland, with its neighbouring communities is home to two-thirds of country's population. Virtually every visitor to Iceland will spend at least some time in its vicinity. Well, there are many good reasons to do so! A plethora of accommodation and dining choices, a variety of cultural events, endless shopping possibilities, and not least numerous daily outings to every corner of the country – the city has much to offer. 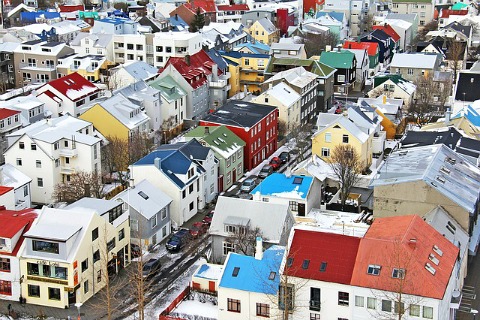 In search of a perfect gift?

Consider Arctic Arc, a luxury photo book with 48 original panoramic photographs from Iceland and Greenland, seamlessly printed edge to edge over the fold!

Aside from Reykjavík proper, the Capital Region of Iceland comprises municipalities of Kópavogur, Seltjarnarnes, Garðabær, Hafnarfjörður, and Mosfellsbær. Among them are three largest cities in the country, and another two are in the top ten. Over 200,000 of Iceland's 330,000 inhabitants live here. It is also pretty safe to assume that every one of over one million visitors to the country in 2014 has passed through the area at some point of his journey. 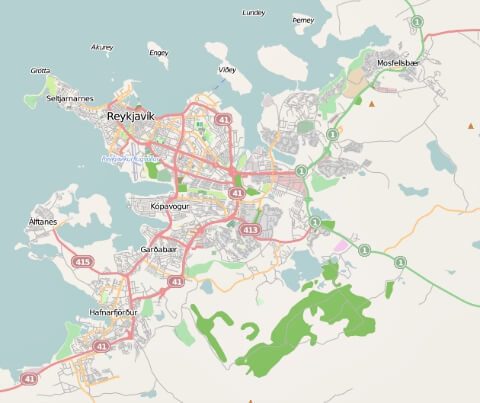 This is for example about 1.5 times the area of Sweden's Stockholm which has 7.5 times as many inhabitants.

The early history of Iceland is well documented in its Book of Settlement, Landnámabók, according to which the modern city area was first colonised by Ingolfúr Arnarson of Norway around 870 AD. Recent archaeological excavations actually found enough evidence to support both the event and its supposed timing. The permanent exhibition dedicated to the origins of the city fittingly bears the name 871±2.

The name of the capital in its present transcription loosely translates as "smoky bay". The original spelling in use up to 14th century, Reykjarvík, or "bay of smokes", is believed to refer to hot springs in the area. Before the end of the 18th century the settlement was in no way significant and barely counted 200 inhabitnts. In 1786, Reykjavík became a town and one of six communities in the country granted a trading charter from the Danish Crown. The only street at that time, today's Aðalstræti, is the oldest ground of the city. The Tourist Information is located here in house no. 2.

In the early 19th century, several fisheries and shipbuilding enterprises moved to what today would become the Old Harbour. To its west, behind the Maritime Museum, the fishpacking district, aka Grandi, hosts some of the latest additions to Reykjavík's vivid culinary, cultural and shopping scene. 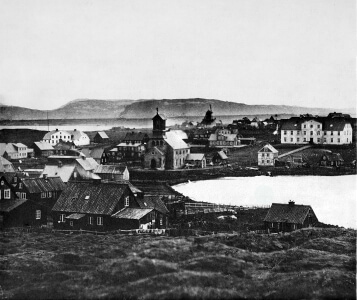 Reykjavík in the 1860s, by Sigfús Eymundsson
Tjörnin, right, reaches farther inland than it does now

The town grew from its original location to enclose these areas, as well as in the opposite direction, towards the pond Tjörnin where the present City Hall is situated. This quarter of the city, its historical centre, is now known as Kvosin.

In 1845, the Althing, Iceland's general assembly which had been holding its sessions from 930 AD to 1799 in Þingvellir, was re-established in Reykjavík as the national parliament. This event promoted the town to the de-facto capital of Iceland though still under the Danish rule. The parliament moved to its current location, Alþingishúsið by Austurvöllur square, in 1881. The name of both the square and the adjacent Austurstræti, meaning "eastern", suggests where the city core lay at the time.

Today many tourist attractions dot the continuation of Austurstræti further east. Bankastræti and Laugavegur, together with Skólavörðustígur leading to Hallgrímskirkja, constitute the main shopping area of the capital with seemingly endless food offerings to boot.

Laugavegur continues beyond Hlemmur, one of the city bus terminals just at the edge of the centre, along the outskirts of the financial district to Laugardalur. The literal "valley of hot springs" houses the Family Park and Zoo, Botanical Gardens, a geothermal swimming pool and the only camping site in the capital.

South of Hallgrím's church dominating the city from a central hill are the National Hospital and the bus terminal BSÍ where Flybus and tour buses pick up and drop off their passengers. Further south still lies the compound of the domestic airport. To its east in the hills district, another capital landmark, Perlan, is situated amid woody surroundings.

Even more than the country as a whole, the capital of Iceland is an all-year destination.

The summer – understandingly – lures the majority of visitors. All attractions in and around the city are easily accessible, all businesses open longer, and the weather is favourable for all sorts of outdoor activities. The high season generally starts in June and lasts through August. Some offerings switch to the summer schedule already in May and stay on it until as late as September.

The autumn sees most tourists leaving abruptly and the festival season slowly kicking in again. Reykjavík International Film Festival starts in the end of September. On October 9, the Imagine Peace light installation on Viðey island re-launches in an annual ceremony. Finally, country's biggest music event, the Iceland Airwaves festival, attracts many local and international interpreters and fans from all over the world to city's numerous stages on the edge of October-November.

The winter comes with the Christmas season and New Year's Eve celebration. Fireworks and traditional bonfires in the first night of the year are a sight to behold. February brings the Winter Lights Festival into beautifully illuminated streets and squares. The Food and Fun festival follows with international chefs offering their take on the Icelandic cuisine in restaurants throughout the city. If the weather plays along, magical Northern Lights make appearance in the dark skies over the city.

The spring starts with the Design March and Reykjavík Fashion Festival, the main display of country's striving creative scene. The First Day of Summer and Children's Culture Festival in April are great events for the youngest, as is the arrival of newborn animals in the Family Park and Zoo in Laugardalur. May is statistically the driest month of the year, yet ahead July and June. The sun brings numerous city dwellers out of their homes onto the terraces of street cafés. Life is back in the capital, while the new summer season is still a few weeks away.

As mentioned in the introduction to Iceland, its capital will probably be your first port of call after landing at the international airport in Keflavík, some 50 km (32 miles) away. To get into the city, hop on one of the buses available upon every arrival. The two principal services, Flybus and Airport Express, will deliver you to the BSÍ bus terminal or Lækjartorg square in the very centre, respectively, from where you can be brought to your city accommodation if desired. The entire trip including the optional drop-off shouldn't take much more than an hour.

Tickets are available in advance from both providers' websites, at their counters in the airport building or direct on the buses. Flybus tickets are also sold at a small discount on all inbound Icelandair flights.

Accommodations in Reykjavík where you can leave or board the bus slightly vary depending on the service you use. The respective lists are visible at providers' websites when you try to book a ride online. Don't fret if your preferred service is not available at your chosen lodging. The listings contain full addresses for all included options, so you can always find an alternative in the vicinity and get off or on the bus there instead. Also, when buying return tickets, you can select to arrive and depart at different locations.

If you want to save on bus fare in exchange for investing some more time, Reykjavík city bus no. 55 makes several infrequent runs between the airport and the city on weekdays. Buy your ticket at the 10/11 shop in the arrival hall. For 1,600 ISK one way, the bus will deliver you to the BSÍ calling en route at the Kringlan shopping mall, the Central Hospital, the City Hall and the University of Iceland. For a ride to the airport, catch the bus at the same locations.

Arriving in the capital on a smaller cruise ship will most likely leave you at the Miðbakki pier in the city centre. 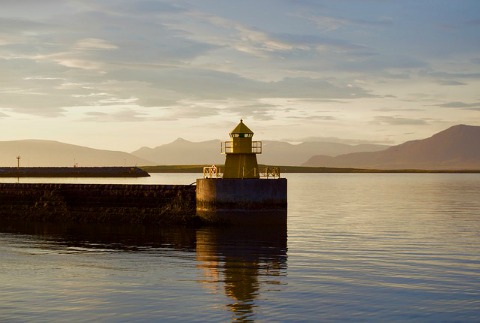 Reykjavík city centre is compact enough for exploring by foot. For everything outside of walking distance, public buses provide a reliable and inexpensive way of transportation. They run at scheduled times every 15 or 30 minutes depending on the service and the time of day. A single ride within the capital area costs 400 ISK as of summer 2015. A 9-ticket card sells for 3,500 ISK. 1- and 3-day cards for unlimited journeys by bus within the specified period are also available, at 1,000 ISK and 2,500 ISK, respectively. Single tickets and multi-ticket cards are also available from bus drivers. You can't pay by credit/debit card on city buses in Reykjavík, and drivers do not give change on cash payments – have your ticket, mobile app, or enough coins ready when boarding. If you need to change buses en route to your final destination, ask the driver of the first bus for a transfer ticket, skiptimiði, when paying.

City sightseeing tour buses depart from Harpa every 30 minutes between 10 am and 5:30 pm during the summer (June to September). The bus stops at Lækjartorg, the City Hall, the Old Harbour, the Maritime Museum, the National Museum, Hallgrímskirkja, Perlan, the Kringlan mall, Hilton Reykjavík, Reykjavík City Hostel in Laugardalur, and Skarfabakki harbour with ferry to Viðey, before returning to Harpa along the sea shore on Sæbraut. You are free to board and leave at every stop. The ticket is valid for 24 hours and costs 3,500 ISK.

For shopping aficionados heading to Kringlan, a free bus shuttle operates between the Tourist Information in Aðalstræti 2 and the mall during the latter's opening hours, calling at Harpa en route. The shuttle departs every hour on the hour and heads back from Kringlan half an hour later.

Useful links about capital of Iceland

The Reykjavík Grapevine
The free magazine in English is published monthly in winter and bi-weekly in summer. The focus is on local events, culture, travel, and life in general. The coverage is very subjective and not always politically correct, which is good for a change. Grab your copy whenever you see one while in the country, or download it from the website as soon as it gets printed. Also, be sure to check their extensive Best of Reykjavík listings online.

International airport
Plan your arrival at the airport voted the best in Europe in 2014.
Flybus and Airport Express
Check schedules, look for accommodations served, and book your tickets online.
Reykjavík city buses
Information on routes, schedules, tickets and prices.

Other articles about Reykjavík

Things to see
Take a stroll around the town or a short ride to its neighbouring attractions.
Things to do
There's always much to do in Reykjavík: make the best from your visit!
Where to stay
From a camping site to a 4-star hotel, there are many accommodation options for every budget. Find out which are the best.
Where to eat
Dining options in the capital of Iceland are plentiful, with the notable absence of fast-food chains. Good for you!

Other articles about Iceland

Of ice and fire
General information about Iceland.
Beyond Reykjavík
Read about sights and activities in different regions of Iceland.

Unattributed images on this page are sourced from Wikimedia Commons and Pixabay.