George Eastman, the Eastman Company, and the first film cameras

The dry collodion process had begun to oust its wet counterpart, and George Eastman launched the Dry Plate Company in Rochester, NY to accommodate the growing demand in pre-manufactured photographic support...

On 11 October 1881, a patent for a "photographic apparatus" capable of taking multiple sequential exposures was issued to David H. Houston of Cambria, Wisconsin. 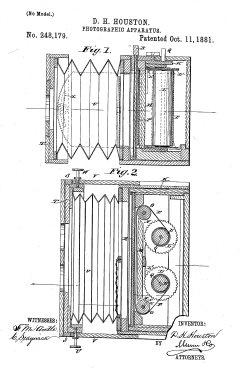 "The object of my invention is to facilitate taking a number of photographic views successively and in a short time.

The invention consists in a camera with a receptacle or box at its inner end containing a roll of sensitized paper or any other suitable tissue — such as gelatine or any more durable material that may be discovered — and an empty reel, upon which the sensitized band is wound as rapidly as it has been acted upon by the light."

The mechanism described by Houston, for which no practicable material yet existed, specifically allowed for variable exposure times as it was equipped with a simple vertical slide shutter operated by hand. In December 1886, Houston patented a revised version of his original invention.

Never fully satisfied with the awkwardness of dealing with glass plates imposed by the collodion process, George Eastman filed his patent application for photographic film on 7 March 1884. The patent was granted on 14 October 1884. 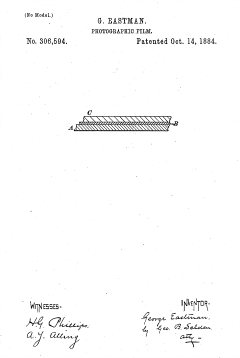 "In the accompanying drawing, which represents a section through one of my improved sensitive films, A is the paper or other support; B, the soluble gelatine layer, and O the relatively-insoluble layer of sensitized gelatine...

The advantages which my improved sensitized films possess over the ordinary glass dry plates are too obvious to require description. Thus, I am enabled to dispense entirely with the glass, the original cost and the expense arising from the handling, cleaning, breakage, and transportation of which I save...

...As an improvement in the art of photography, the process consisting in, first, providing an insoluble sensitive gelatine film affixed by solvent material to a supporting-sheet; second, in exposing and developing said film; third, attaching the developed film to a rigid plate by means of wax or its equivalent; fourth, in detaching the support from the film by the application of heat; and, fifth, stripping the film from the waxed surface..."

In effect, the first film on a paper base was little else than calotype's support coated with dry collodion-alike substance. However, it was undoubtedly a great improvement of both processes. Moreover, film became the first photographic material suitable for mass production. In fact, the Eastman Dry Plate Company commenced its manufacturing shortly thereafter.

It took another four years for George Eastman to develop the first camera utilising his film.

The first film camera on the market was the Kodak, for which a separate patent was granted to Eastman on 4 September 1888. The camera measured 3.25 x 3.75 x 6.5 inches, weighed 1 lb. 10 oz., and came loaded with a roll of film for 100 images. A sole leather carrying case with strap was also included. Compared with the usual equipment of the time, this was portable indeed. The piece sold for $25, some two weeks' worth of wages.

It wasn't very sophisticated, though.

"If, instead of sending the spool of exposed film to the Eastman Company to be developed and printed, the Kodaker (sic) wishes to develop and print from his own negatives, he can also learn to do so by following carefully the directions given."

The directions were detailed instructions for handling Eastman negatives and generally not for the faint-hearted.

Roll on the holidays

The Kodak was around for about a year and sold more than 5,000 times, its highest serial number being 5,192. It was heavily advertised, specifically targeting the travelling audience. 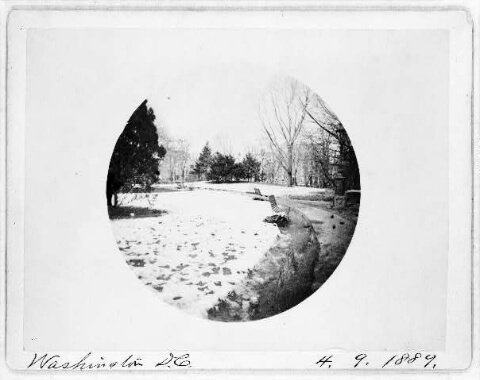 "A PICTURESQUE DIARY of your trip to Europe, to the mountains, or to the sea-shore, may be obtained without trouble with a Kodak Camera, that will be worth a hundred times its cost in after years."

"AS A TOURIST'S CAMERA it is unrivalled. No cumbersome tripod, plate-holders, or other effects of the ordinary outfit are needed... A trip SOUTH, to CALIFORNIA, or to EUROPE may be rendered doubly enjoyable, and a complete illustrated record of interesting scenes and incidents secured by use of this little instrument."

"When You Come Back from your summer vacation, you can bring nothing with you that will afford greater satisfaction to your friends or yourself than 100 or more Photographs, taken with the Kodak Camera and forming a picturesque note-book of your travels."

In 1889, the Eastman Company acquired rights for Houston's patents and replaced the original Kodak with four revised versions. During the same year, film made its transition from paper to nitrocellulose.

1891 saw the birth of "daylight" Kodaks which could be loaded and emptied outside the darkroom.

In 1892, 14 styles and sizes were on offer. The company became Eastman Kodak Company of New York.

The genie was out of the bottle and bound to stay around for over hundred years to come.

How everything began
Part 1: From the beginnings to the camera obscura.
Nicéphore Niépce, Louis Daguerre, and the first photographs
Part 2: The light gets captured.
Calotype and the first negatives
Part 3: The first negative-positive process makes multiple prints possible.
Collodion process and glass plate predominance
Part 4: The best of two worlds.