After 2,000 years of advances in the field of optics, camera obscura became a useful tool for reproduction of real scenes on paper. However, its utilisation required considerable manual effort and skill. This was about to change at the beginning of 19th century...

In 1727, Johann Heinrich Schulze, a German professor at the University of Altdorf, discovered the light sensitivity of silver salts. He'd noticed a discolouration of a silver nitrate solution accidentally exposed to the sun (left in a glass bottle on a window sill). Not sure about the reason for this effect being heat or light, he put some silver nitrate in an oven. After it hadn't darkened, he mixed in some chalk, put the blend into a bottle wrapped in stencilled paper, and exposed it to the sun.

“I covered the glass with dark material, exposing a little part for the free entry of light. Thus I often wrote names and whole sentences on paper and carefully cut away the inked parts with a sharp knife. I struck the paper thus perforated on the glass with wax. It was not long before the sun's rays, where they hit the glass through the cut-out parts of the paper, wrote each word or sentence on the chalk precipitate so exactly and distinctly that many who were curious about the experiment but ignorant of its nature took occasion to attribute the thing to some sort of trick." 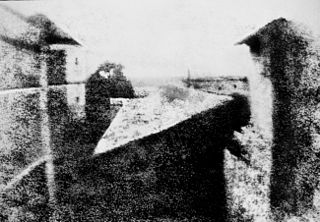 View from the window at Le Gras, 1826-7, the oldest surviving camera photograph

Come 1816, Nicéphore Niépce, a French inventor, managed to obtain negative images from a small camera on paper coated with silver chloride. However, he didn't find a way to invert shadows and highlights or to prevent the coating from further darkening when exposed to light for viewing.

Disappointed in silver salts, Niépce started experimenting with organic substances and finally was able to succeed with bitumen-coated pewter plates. Placed into the camera and left to be exposed for a very long time, said to be hours if not days, the coating hardened according to the brightness of light it was subjected to. The soft parts were afterwards removed using lavender oil as a solvent, uncovering the plate where the image was at its darkest. Thus, a stable, positive representation of the image was achieved, with bitumen standing for lighter and bare pewter for darker areas of the scene. The oldest surviving photograph, depicting a view from Niépce's studio, was created in 1826 or 1827. No wonder, it was a landscape, considering the time needed for the exposure.

Working on the improvement of the painfully slow process, Niépce partnered in 1829 with Louis Daguerre, a theatrical designer and inventor of the diorama. This popular show was based on large-scale, semi-transparent backdrops painted on both sides. Cleverly lit, they presented different aspects of the same scene when illuminated alternately from in front and from behind.

After Niépce's death in 1833, Daguerre continued experimenting with different chemicals eventually turning back to silver salts which had made Niépce so desperate years ago. His efforts led to the discovery of a faint latent image already appearing on a silver-iodide covered plate just minutes after the exposure has begun. This image could become visible by treatment with mercury vapour.

In 1837, Daguerre was finally able to stabilize the image by removing the silver iodide rests with a hot solution of common salt. This established the first practical photographic process, which Daguerre didn't hesitate to name after himself, daguerreotype, with the obvious purpose to profit from it.

On 7 January 1839, a meeting at the French Academy of Sciences made the technique public without revealing its exact details. The announcement came about at insistence of François Arago, a member of both the Academy and the chamber of deputies, France's main legislative body. Arago was confident about the importance of the invention and assured of the necessity to make it freely available. To this end, he planned to persuade the government to buy the rights for its use.

The plan eventually worked out; the French government agreed to pay pensions for Daguerre and Niépce's son, and the world received the gift of complete daguerreotype instructions on 19 August 1839. Five years later, Marc Antoine Gaudin remembered the day in a book: 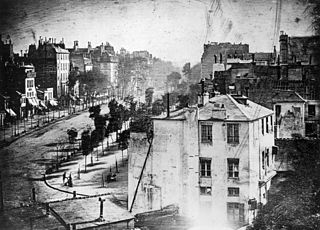 "Finally, the sitting is over, the secret divulged...

A few days later, opticians' shops were crowded with amateurs panting for daguerreotype apparatus, and everywhere cameras were trained on buildings. Everyone wanted to record the view from his window, and he was lucky who at first trial formed a silhouette of roof tops against the sky. He went into ecstasies over chimneys, counted over and over roof tiles and chimney bricks – in a word, the technique was so new that even the poorest plate gave him unspeakable joy..."

The joy wasn't shared in Britain, though. By the peculiar whim of fate, Daguerre's agent in London had applied for a British patent before the process hit the public domain. Britain became the only country to pay license fees for using the daguerreotype.

While Louis Daguerre's invention sparked the enthusiasm for photography all over the world, it didn't take long for an alternative process to establish itself. It came from Britain, for sure.

How everything began
Part 1: From the beginnings to the camera obscura.
Calotype and the first negatives
Part 3: The first negative-positive process makes multiple prints possible.
Collodion process and glass plate predominance
Part 4: The best of two worlds.
George Eastman and the first film camera
Part 5: The dawn of the film.