The history of photography begins with the search for a reliable drawing aid, and invention of camera obscura

Often thought to be of rather young age, the history of photography actually spans more than two millennia.

The word itself is widely attributed to Sir John Herschel, an English scientist of manifold disciplines, inventor, and experimental photographer himself. The term "photograph", created from Greek roots for "light" and "drawing", as well as the corresponding verb ("to pursue creation of photographs") and "photography" ("the process, practice, or occupation of photographing") were all used in his lecture held before the Royal Society on 14 March 1839.

If photography were a technological advance in one of the Civilization games, its required precursor technologies would have been optics and chemistry. 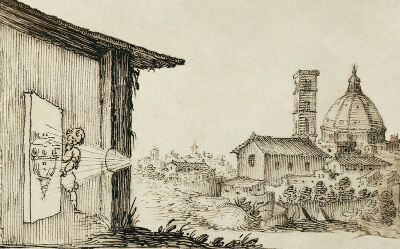 That light can create images was observed long before the first photographs were taken. Chinese philosopher Mozi, or Mo Di, described a box with a tiny hole for light, the first pinhole camera, in the 5th century B.C. He correctly predicted that the image in such a box, which was to become camera obscura (Latin for "darkened chamber" or "dark room") during the Renaissance, should appear inverted in both dimensions, i.e. flipped upside down and left to right, due to light always travelling in a straight line from its source. Similar observations were made by Greek philosophers Aristotle and Euclid some hundred years later.

In the 11th century, the Arab scholar Ibn al-Haytham, known in the West as Alhazen, experimented with images seen through a pinhole while working on his influential Book of Optics in seven volumes. This work was later translated into Latin and studied by Leonardo da Vinci. After his own extensive exploration of optics and human vision, da Vinci described the principles behind the camera obscura in his Codex Atlanticus (1502):

You will catch these pictures on a piece of white paper, which placed vertically in the room not far from that opening, and you will see all the above-mentioned objects on this paper in their natural shapes or colors, but they will appear smaller and upside down, on account of crossing of the rays at that aperture. If these pictures originate from a place which is illuminated by the sun, they will appear colored on the paper exactly as they are. The paper should be very thin and must be viewed from the back."

During the second half of the 16th century, several Italian scholars successively added a lens and a mirror to the design of the camera obscura, still not known under this denomination, to re-invert the image obtained by it and show it in the correct way. Finally, a diaphragm controlling the size of the aperture was introduced by Daniele Barbaro in his work La pratica della perspettiva (1569).

Perfectly in spirit of his time, Barbaro had studied philosophy, mathematics and optics, served as ambassador of the Venetian Republic in London, was appointed Cardinal of the Roman Catholic church, created several architectural designs, translated and commented on work of Vitruvius; all of this accomplished in mere 57 years of his life. With his improvements and growing availability of portable models, camera obscura became a self-contained instrument and a viable drawing aid for travellers wishing to keep trace of visited places, as suggested by Barbaro himself: 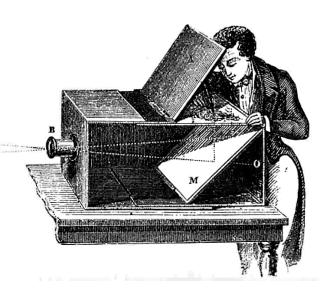 "Close all the shutters and doors until no light enters the camera obscura except through the lens, and opposite hold a piece of paper which can move forward and backward until the scene appears in sharpest detail. There on the paper you will see the whole view as it really is, with its distances, its colours and shadows and motion, the clouds, the water twinkling, the birds flying. By holding the paper steady you can trace the whole perspective with a pen, shade it and delicately colour it from nature."

If these instructions sound a bit like painting by numbers, well, they pretty much were! There has been much discussion lately about old masters taking advantage of this and similar techniques for their creations. Johannes (Jan) Vermeer's painstakingly detailed depictions of 17th century Dutch townscapes and interiors have made many an art historian to ask: did he, or did he not? (Yes, he probably did.) Canaletto and Sir Joshua Reynolds are also being named as frequent camera obscura users, among others.

So, the camera, as it was finally called since the beginning of the 17th century, had become state of the art, in all meanings. But with the advent of the 19th century, the primary concern shifted to the invention of a reliable method, other than retracing by hand, for retaining and securing images obtained by it.

In 1833, after a failed attempt to utilise a related tool, the camera lucida (consisting of a glass prism mounted on a rod above a drawing board), William Henry Fox Talbot wrote:

"...how charming it would be if it were possible to cause these natural images to imprint themselves durably, and remain fixed upon the paper!

And why should it not be possible?"

The history of photography continued with the discovery of light sensitivity of silver salts and the invention of the first photographic process...

Camera exposure and its elements
Understanding camera exposure principles and settings, including exposure compensation and bracketing.
Photography composition
Composition is ultimately what your photography stands or falls with. Even with the exposure nailed down, if your images don't engage the viewer, nobody will bother. Read here what matters in order to succeed.